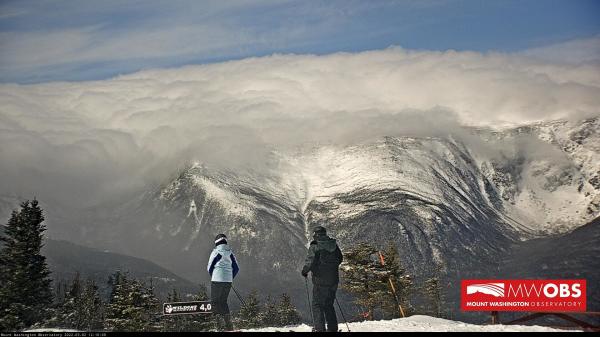 Mount Washington is the highest peak in the Northeastern United States at 6,288 ft and the most prominent mountain east of the Mississippi River.

The mountain is well-known for its extreme weather. This is partly due to the convergence of three storm tracks, the Atlantic to the south, the Gulf of Mexico and the Pacific Northwest.

In addition the vertical rise of the Presidential Range, and its north-south orientation, present a significant barrier to westerly winds. In winter, temperature differences between the cold land mass of the Northeastern US and the warmer Atlantic Ocean, encourage development of low pressure running up the coast along this boundary.

These factors produce hurricane-force wind gusts on the summit over 100 days per year. In the spring of 1934 wind at the summit weather station was measured at 231 miles per hour. This remains the highest windspeed ever measured outside of a tropical cyclone. In winter wind chill is a constant concern.

Mount Washington is a premier spot for backcountry skiing and ski mountaineering. When conditions are right it’s possible to ski from the summit all the way back to Pinkham Notch, a run of over 4,000 vertical feet.

Tuckerman Ravine is a magnet for skiers in the spring, when temperatures are more moderate and avy danger is generally lower.  While the ravine averages less than 300 inches of snow per season, high winds deposit deep snow in several couloirs. The bowl has a selection of steep runs that range in pitch from 40 to 55 degrees. Lines get progressively steeper from lookers left to right starting with Left Gully, The Chute and the Center Gullies. The Icefall is 55 degrees with significant mandatory air. The Lip is an open run that averages between 50 and 55 degrees. Right Gully is one of the bowl’s “easier” lines. It drops into The Sluice about halfway down, which averages about 40 degrees.

We want this page to be a go-to source for Mt Washington ski weather info. If you’ve got ideas about how to make this page more valuable, post your thoughts here on the Blog, or in the Weather Page Thread in the NY Ski Forum, or email us. Small maps click to enlarge.